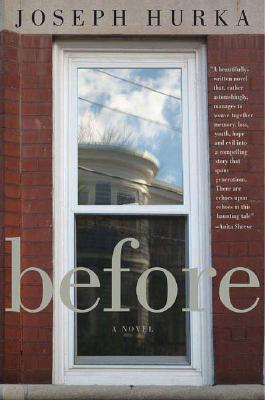 It is a September night in 2001 in a quiet neighborhood of Cambridge, Massachusetts. Seventy-three year-old Jiri Posselt and his wife, Anna, are survivors of the Nazi era in Czechoslovakia; they have befriended a neighbor named Tika LaFond, a college student, who has gone through great difficulties of her own and looks to Jiri and Anna as surrogate parents. As night descends, we are introduced to another character as well, known initially to the reader as “Ghost Man.” Ghost Man invades the apartments of many of the neighborhood women when they are not at home and takes inventory of their belongings; slowly, from his point of view, we discover why this man is so twisted, and that he, too, is a man haunted terribly by his past. On this night, fortified with amphetamines, he is becoming more and more violent, and by the early hours of morning, he will fix his attention exclusively on Tika LaFond. It will fall to Jiri Posselt—weakened by strokes, but still a determined soul—to help his young friend. Before is a meditation on the birth of terror, and on the courage required to fight it.

"A powerful and fearless novel about the violent histories people carry into exile--and the way memory continues to haunt, even after decades of peace. Intense, often frightening, ultimately redemptive." -- PETER ORNER